The Electoral College or the USA, We Cannot Keep Both 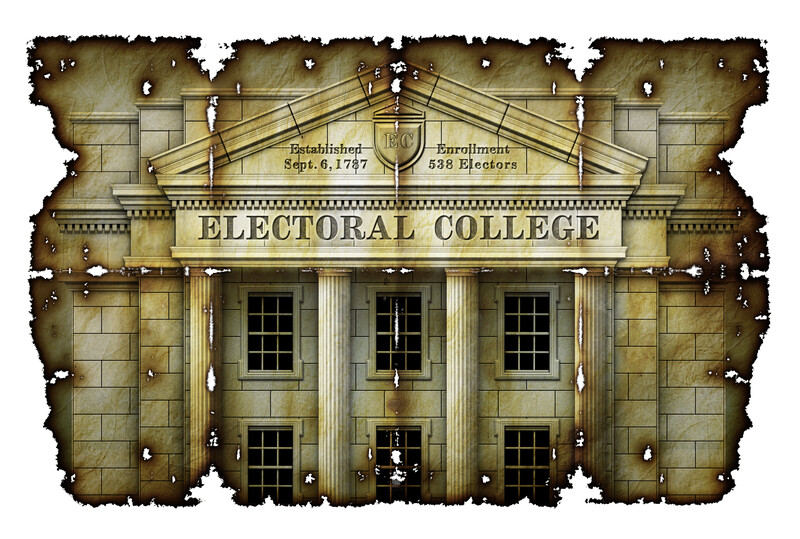 The Electoral College or the USA, We Cannot Keep Both

The myriad alleged “problems” we are having with elections in our country can be distilled down to two words: Electoral College.  In no other country in the world can one candidate win by millions of legitimate votes (7,059,547 according to the Cook Political Report) yet have the legitimacy of those votes ignored and challenged.  However, the challenges have not come in states where Donald Trump won narrowly, only in those states he lost narrowly.  Because of the Electoral College, candidate Trump was pleading with the Secretary of State in Georgia to “find” 11,780 votes (one more than the total by which he lost) to turn the state and its electoral votes.

I’m guessing the desire was the same in Arizona (10,457 vote difference), Nevada (33,596) and Wisconsin (20,682).  In states with a larger spread like Michigan (154,188) and Pennsylvania (80,555) the plan seemed to be to only challenge the votes cast in cities such as Detroit and Philadelphia, essentially claiming that all the votes not cast for Trump in those jurisdictions were fraudulent, but only those not cast for Trump.  Let me make it plain: only those votes cast by African American voters were targeted for negation.  In Nevada, the 33,596-vote margin was basically not denigrated and vilified because that would mean attacking Latino voters, which could have negative consequences in future elections in places like Florida and Texas.  So, the obvious, racist, and insulting targeting was to challenge votes in any majority black urban area where Donald Trump “narrowly” lost the statewide vote, but only the urban areas and never the rural areas where he performed well, the implication being that those rural votes and voters were beyond reproach.

Here’s what Constitutional architect and fourth president of the United States James Madison wrote about the Electoral College at the time it was being drafted and considered, “There was one difficulty of a serious nature however attending an immediate choice by the people. The right of suffrage was much more divisive in the north rather than the southern states; and the latter could have no influence in the election on the score of Negroes. The substitution of electors obviated this difficulty and seemed on the whole to be liable to the fewest objections.”

In a nutshell, we got stuck with the Electoral College in the latter portion of the 1700’s as a compromise because of America’s “birth defect” of slavery. Now, in the third decade of the 21st Century, we’re still being harmed by the “peculiar institution” of the enslavement of stolen human beings enshrined in our Constitution in the 1700’s.  If the Constitution were intended to remain unchanged, the founders would not have included language in the Constitution to allow it to be amended.  Indeed, this allegedly sacrosanct and unchangeable document has been amended seventeen times with additional amendments often addressing omissions (replacing the vice president in the event of a vacancy) and in response to changing societal paradigms (voting rights for the formerly enslaved, for women and for young adults once they turned eighteen).

Thus, the calculus on “winning” presidential elections depends upon maintaining the outdated slavery-era legacy of the Electoral College, while simultaneously passing new “ballot security” laws for an election that Chris Krebs, a Republican and Trump’s own senior cybersecurity official, declared through the Department of Homeland Security was, “the most secure in American history.” For having the temerity to rely on facts and speak truthfully, Krebs was fired.  Since that time hundreds of unnecessary “solutions” to a “problem” that does not exist have been proposed around the country with some becoming law.  Again, the plan is to diminish the votes and voters who did not vote for Trump to eke out a “victory” even while losing the popular vote.  As losers of the popular vote in seven of the past eight presidential elections, Republicans are relying on their last refuge, the Electoral College, to try to hold onto power and force their policy agenda and court appointments on a nation that did not vote for them or their agenda.